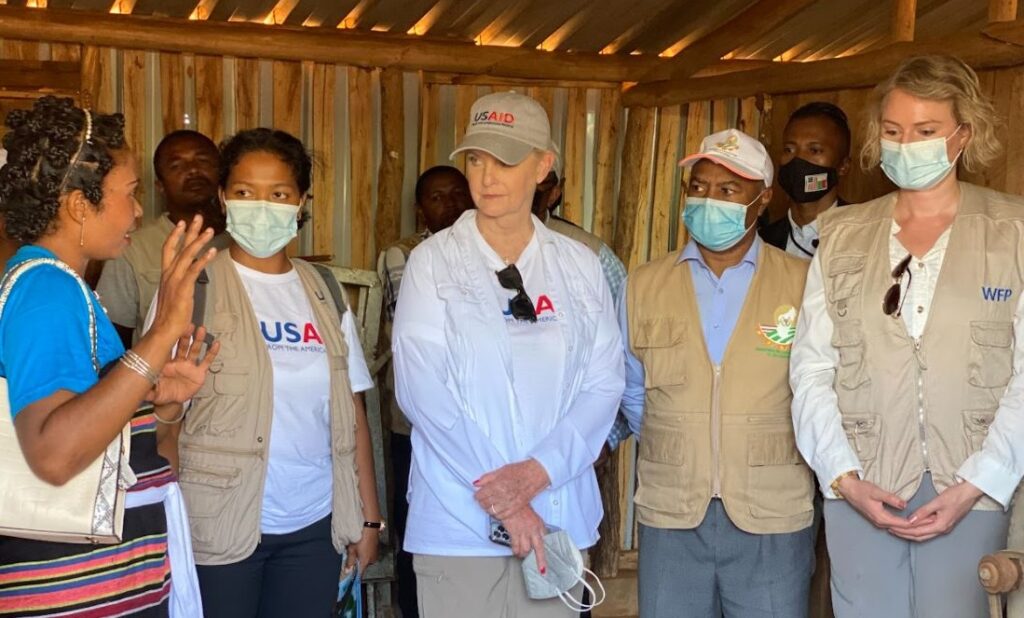 Cindy McCain, the U.S. Ambassador to the three United Nations food agencies based in Rome, completed today a two-day visit with the United States Agency for International Development (USAID) to southern Madagascar, where half the population is food insecure after several years of intense drought.

Regarding the situation in the south, Ambassador McCain noted, “the scope of the crisis in the Grand Sud is heartbreaking. I have learned about communities who have endured one catastrophe after another, from extreme drought to locusts and cyclones. But I also witnessed moments of hope in the work that the UN agencies, USAID and the Malagasy government are supporting to build resilience in these communities. We are in this together.”

This trip, jointly organized by the relevant UN agencies and USAID, focused on various projects by the aid agencies in response to the humanitarian emergency, including:

Ambassador McCain also met with the Minister of Agriculture and Livestock, the Governor of southern Madagascar’s Androy region, and the National Disaster Risk Management Office to discuss drought, water, and nutrition support.

“Assisting with the crisis in the south remains a top priority for the U.S. government,” U.S. Chargé d’Affaires Amy Hyatt said. “The seriousness of the situation cannot be overstated.  Many people are in life-or-death circumstances. That is why the United States continues to stand by the people of Madagascar to respond to this crisis, try and prevent starvation and famine, and help those who desperately need it.”

“Agricultural producers represent 90% of the population in these regions. Efforts to revive agriculture and build the resilience of farming households have already proven effective for the tiny fraction (nearly 20,000 households, or about 100,000 people) that have been fortunate enough to participate in FAO’s interventions. We continue to mobilize resources to cover all farming, livestock and fishing households with the aim of empowering them and restoring their dignity. We need to gradually move them away from these levels of food crisis and start real development steps” said Mbuli Charles Boliko, FAO Representative in Madagascar, Comoros, Mauritius and Seychelles.

“IFAD is committed to accompanying Madagascar in its rural transformation and will not abandon it even in times of crisis,” said Sara Mbago-Bhunu, IFAD Regional Director for the Eastern and Southern Africa Division. “Southern Madagascar remains a priority for IFAD. Currently, we have three programs underway – the Inclusive Agricultural Value Chain Development Program, the Vocational Training and Agricultural Productivity Improvement Program, and the Grand Sud Recovery and Resilience Project to restore the productive capacities of rural households most affected by kéré – at a total cost of US$336 million, including an IFAD investment of US$183 million, to help 515,000 rural households address the challenges of climate change, drought, famine and cyclones.” IFAD has supported 17 development projects and programmes in Madagascar at a total cost of US$880.64 million. “More than 1 million rural households have benefited directly,” added Mbago-Bhunu.

“WFP has been leading the emergency response in southern Madagascar, working hand in hand with partners like the Government of Madagascar and the United States. Our efforts together have averted famine-like conditions and reduced malnutrition among children and women in the region,” said Pasqualina Di Sirio, WFP Country Director in Madagascar “At the same time, our resilience programmes promoting sustainable agricultural practices and climate adaptation have benefitted hundreds of farmers. As we approach the end of the lean season, I am confident that working together we will help communities become food secure and more resilient.”

The UN agencies and USAID are working together to build community resilience to climate shocks in Madagascar’s deep south, where the latest analysis suggests 1.47 million people – or 50 percent of the region’s population – are food insecure.

The U.S. government is the leading provider of emergency assistance to the south.  Since 2015, the American people, through USAID, have committed more than $261 million to the region.  Projects funded by the U.S. government in southern Madagascar are currently feeding more than 894,000 people, treating and preventing malnutrition in 414,000 women and children, improving water access for 54,000 people, and assisting more than 565,000 farmers with agricultural recovery activities.