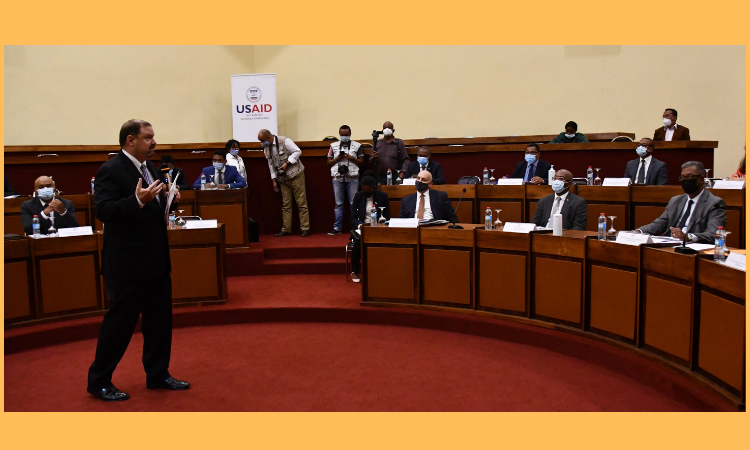 Under the new strategy, the U.S. government will invest more than $490 million over the next five years

U.S. Deputy Chief of Mission Tobias Glucksman led a briefing by United States Agency for International Development (USAID) officials to outline USAID’s new five-year Country Development Cooperation Strategy (CDCS) for Minister of Foreign Affairs Dr. Liva Djacoba Tehindrazanarivelo and other Government of Madagascar Ministers.  Under the new strategic plan, the U.S. government will remain Madagascar’s foremost development partner, investing more than $490 million in development assistance over the next five-years to help the Malagasy people improve their well-being and resilience and to drive Madagascar’s journey to self-reliance.

During the briefing, USAID provided government officials with an overview of the U.S. agency’s current activities and presented the new strategy, introducing the three objectives that will drive USAID’s development work under the CDCS: (i) improving human capacity, (ii) improving government accountability, and (iii) increasing sustainable economic opportunities.  USAID’s new strategy was designed in consultation with the Government of Madagascar and other development stakeholders.

In his remarks, Deputy Chief of Mission Glucksman underlined the close partnership between the United States and Madagascar saying, “The United States of America and Madagascar are like ‘mpirahalahy mianala; ianao tokiko, izaho tokinao,’ as we both seek to boost human capacity, improve governance and rule of law, and provide more economic opportunities in agriculture and the environment.  The new country strategy prioritizes these shared goals, and, in so implementing the strategy, USAID will work side-by-side with the Government of Madagascar, implementing partners, civil society organizations, the private sector, and all of you to ensure we not only reach, but exceed, our targets.”

Under the new CDCS, USAID will concentrate its work in the areas of food security, nutrition, environmental policy and protection, job creation and economic growth, democracy and governance, and public health.  USAID’s largest program is in the health sector with focus areas in malaria prevention and treatment, family planning, maternal and child health, health systems strengthening, and water, sanitation, and hygiene.

Last year, USAID assistance to Madagascar totaled $121.7 million, including $72 million in activities for the health sector, where the U.S. is the largest single-country donor, and $40 million for food security, where the U.S. has been the leading provider of food assistance to the drought-stricken south since 2015.  In December 2020, the U.S. government announced an additional $100 million for urgent relief and long-term development work in the south and south east.