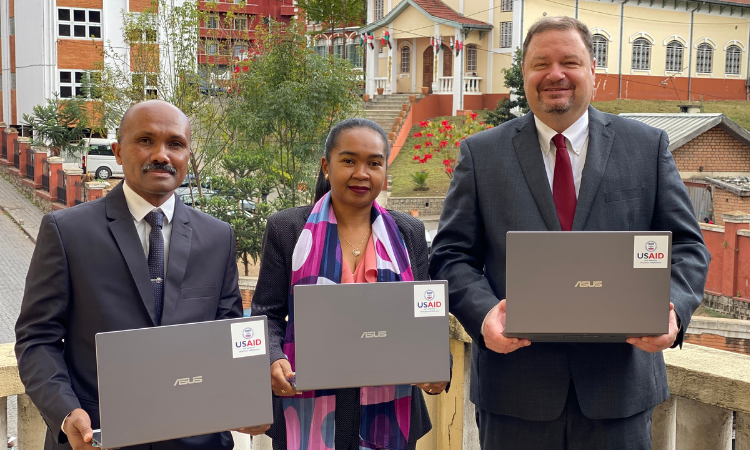 The donation will strengthen the Court of Account’s operational effectiveness, enhance their ability to conduct in-depth investigations and evaluations, and transparently share findings with the public.

The U.S. Government, through the U.S. Agency for International Development (USAID), donated computer and teleconference equipment in partnership with the Ministry of Justice to enhance management at Madagascar’s Court of Accounts and improve oversight of public funds.  Like “mpirahalahy mianala,” the United States is supporting Madagascar in its efforts to foster prosperity by building effective, accountable, and inclusive institutions.

The Court of Accounts is Madagascar’s supreme audit institution, responsible for auditing and judging all public expenditures, as well as conducting policy evaluations for the national assembly.  The equipment– including laptops, mobile telephones, and video conferencing equipment– will improve the Court’s records management system and enhance the Court’s ability to conduct fieldwork, liaise with the regional Financial Tribunals, and share experiences and best practices with other Supreme Audit Institutions across Africa and the world.  The equipment, combined with ongoing technical assistance from USAID, France, Morocco, and Norway, will empower the Court of Accounts to conduct audits and review policies more efficiently, improving government transparency and citizen engagement in government functions.

During the ceremony, the President of Madagascar’s Court of Accounts, Mr. Jean de Dieu Rakotondramihamina stated, “The ability of the Court of Accounts to conduct fieldwork is essential to ensuring every citizen feels their voice will be heard.”

The five-year ‘TANTANA’ program is funded by USAID and will improve the Court’s internal governance, strengthen communication and public engagement and enhance the quality and impact of the audits and judgements produced by the Court.  USAID’s partner, the International Organization of Supreme Audit Institutions’ Development Initiative (IDI), will implement the records management system.

USAID has worked for 37 years to help the Malagasy people accomplish their development goals in the face of ongoing challenges.  Last year, USAID assistance totaled $133.5 million, including $74.5 million in activities for the health sector, where the U.S. is the largest single-country donor.  Since 2015, USAID has committed more than $229 million for emergency and development assistance to southern and southeastern Madagascar.