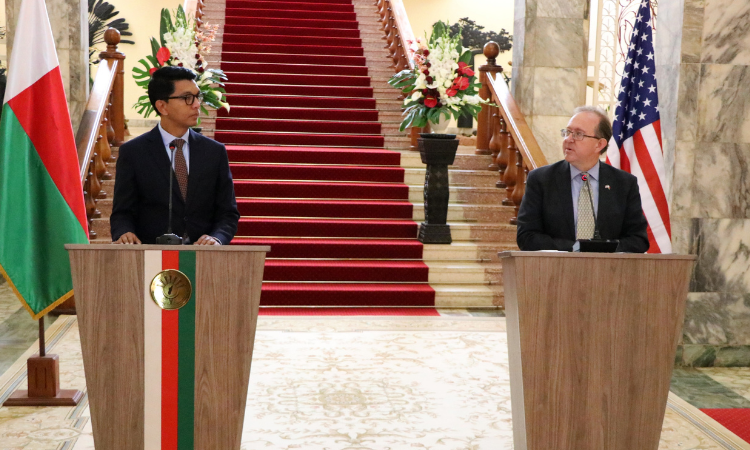 President Andry Rajoelina joined Ambassador Pelletier for the announcement, underscoring how the U.S. Government and the Government of Madagascar are like “mpirahalahy mianala” responding to the dire needs of families in hunger and providing long-term solutions to food insecurity in the south and southeast of Madagascar.

Ambassador Pelletier signaled that, while this new funding would bring relief to many people, it would not meet the needs of everyone.  He called upon other donors to also contribute, saying, “I am pleased to see the international community turning its attention towards the urgent situation in southern Madagascar, but more help is needed.  Over 1.1 million people are currently facing high levels of food insecurity and that number is expected to rise.  We welcome the efforts for long-term development in the South announced by HEM President this weekend, and we also urge the international community and the Government of Madagascar to increase their efforts to prevent a worsening famine.”

Recent analyses, including by two food security experts from the United States Agency for International Development (USAID) at the end of May, have clearly shown that the food security situation is at its most alarming levels since the start of the droughts in 2014.  At least 14,000 people are already at the point of famine; the upcoming harvests are expected to be very poor; and access to food will likely worsen heading into 2022.

The near $40 million provided by the U.S. Government through USAID will fund ongoing programs operated by USAID partners the World Food Program (WFP), UNICEF, and Catholic Relief Services (CRS).  A portion of the funding for WFP will, from August to October this year, provide immediate food assistance for 465,000 people and supplementary food to prevent acute malnutrition for 19,800 pregnant women and new mothers as well as 63,400 children.  Other funding will be used by WFP and CRS to prepare food assistance for the coming lean season, expected to start in October.  CRS will also rebuild and repair wells in targeted communities.  WFP and UNICEF will provide treatment to 57,000 children suffering from either moderate or severe acute malnutrition.  UNICEF will also deliver access to safe drinking water and hygiene promotion for over 100,000 people, while WFP will also operate flights bringing in additional supplies and humanitarian staff.  These projects complement or extend other USAID-funded emergency and development assistance currently being delivered in the south.

Since 2015, the U.S. Government through USAID has been the leading provider of assistance to the south, having committed more than $229 million to respond to the urgent needs of families in hunger and provide long-term solutions to food insecurity.  In December 2020, U.S. Ambassador Pelletier, alongside President Andry Rajoelina, launched three USAID food security programs to provide immediate food relief and long-term development in the south and southeastern regions.

Last year, USAID assistance to Madagascar totaled $133.5 million.  That amount included $74.5 million in activities for the health sector, where the United States is the largest single-country donor, and $48.5 million for food security, where U.S. food assistance has helped more than 1.5 million Malagasy citizens survive through the devastating series of droughts that have struck southern Madagascar.