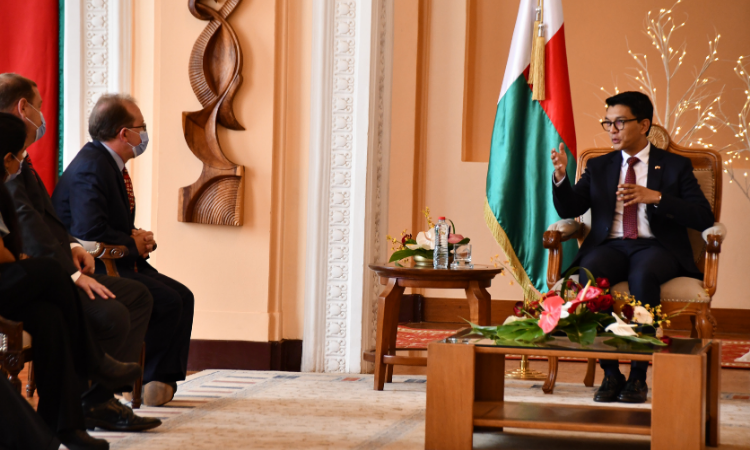 ANTANANARIVO – Alongside President Andry Rajoelina, U.S. Ambassador Michael P. Pelletier was pleased to announce three new projects funded by the United States Agency for International Development (USAID), making an additional $100 million commitment by the United States to combat food insecurity in Madagascar.  Through these projects, the Government of the United States, working side-by-side with the Government of Madagascar, will respond to the urgent needs of families in hunger and provide long-term solutions to food insecurity in the south and southeast of Madagascar.

Ambassador Pelletier, who just returned from a trip to the most affected regions of the south, shared his impressions of the challenges there, and the effectiveness of ongoing US assistance, in coordination with the Government and many partners.  He invoked a well-known Malagasy proverb, noting that “We are brothers walking in the forest…You can always rely on the United States of America, as we know we can rely on Madagascar.”

In the past decade alone, the United States has helped the Government of Madagascar and the Malagasy people overcome cyclones, plague, measles, and COVID-19.  Since 2015, the U.S. government has been the leading provider of food aid and agricultural supplies to southern Madagascar, providing more than $100 million in emergency assistance.

In line with the Government of Madagascar’s own strategy for addressing food insecurity in the south, these three new USAID projects will not only provide emergency food assistance, but also develop long-term solutions to food insecurity.

The third USAID project is the five-year, $45 million Fiovana project, which will reduce food insecurity for more than 428,000 people in the southeastern regions of Vatovavy-Fitovinany and Atsimo Atsinanana.  The Adventist Development and Relief Agency will implement Fiovana.

These projects will collaborate closely with the Government of Madagascar’s drought response and long-term development efforts.  They are also aligned with more than $10.5 million in U.S. government-funded emergency activities that the World Food Programme and UNICEF are already delivering, including 8,330 metric tons of emergency food aid and $2.5 million in malnutrition treatment for young children.

The U.S. government, through USAID, has worked with the Government of Madagascar and local partners for 36 years to promote the health and prosperity of the Malagasy people.  Last year, USAID assistance totaled $114 million, including $62 million in health sector activities where the United States is the largest single country donor.  The other $52 million supported a range of programs to promote economic growth and job opportunities, protect and develop natural and human resources, marine and forest resources, and promote sustainable agriculture and food security.