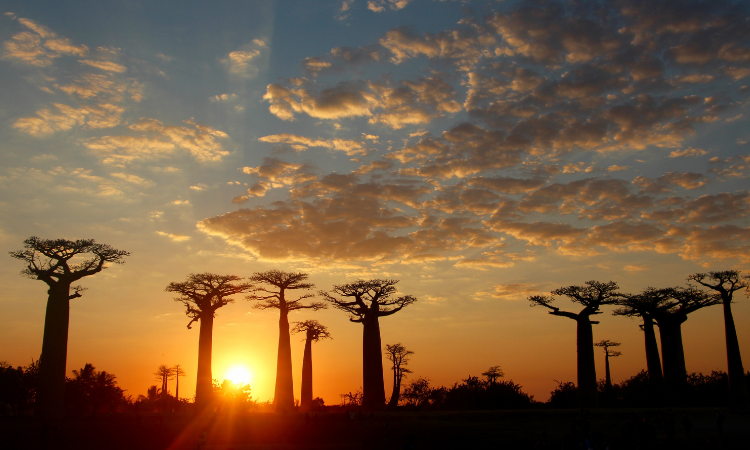 USAID awards a $130,000 research grant to the University of Antananarivo

Madagascar’s most iconic baobab tree species, the Adansonia grandidieri Baillon, are economically valuable and culturally emblematic of the nation.  They are also orphans.

Research botanists like University of Antananarivo’s Dr. Seheno Andriantsaralaza consider plants like the baobab “orphaned” because the animals that naturally disperse the baobab’s seeds have disappeared, endangering the trees’ ability to reproduce.  These critical animals likely included the elephant bird, giant lemurs, and giant tortoises – all of which went extinct over 1,000 years ago.

“It is a mystery which animals are currently able to disperse the seeds of the baobab trees,” explained Dr. Andriantsaralaza.  It is a mystery that she aims to solve with support from the U.S. government.

Dr. Andriantsaralaza is the latest Malagasy scientist selected to receive a grant from the United States Agency for International Development’s (USAID) Partnerships for Enhanced Engagement in Research (PEER) program.  The PEER program is a competitive grant initiative that invites scientists in developing countries to partner with U.S. researchers to solve some of development’s most vexing problems.

USAID has awarded PEER grants to a number of Malagasy researchers, including to build the recently-announced reference library for Madagascar’s precious woods and to create an environmentally-friendly, sustainable protein from crickets.

Dr. Andriantsaralaza has received $130,000 to study which modern day animals may spread baobab seeds.  “We aim to find out if there are any species of, for example, lemurs that may be able to disperse [baobab] seeds,” said Dr. Andriantsaralaza.  “If there are, it will be important for protected area managers and communities to protect these species in order to help preserve the baobab trees and these critical ecosystems.”

Another aspect of Dr. Andriantsaralaza’s research will examine the human use of baobab products.  Baobab fruit, seeds, and bark are increasingly popular as key ingredients in food and cosmetic products, but scientists do not yet understand what level of exploitation of these resources is sustainable.  The project will work with local communities and companies to design income-generating activities that ensure the sustainable use of baobab resources.

The U.S. government recognizes the global significance of Madagascar’s unparalleled biodiversity as well as the critical role natural resources play in the nation’s economic and human development.  We work side-by-side with the Government of Madagascar and the Malagasy people like #mpirahalahy mianala to secure the nation’s natural resources and biodiversity from illegal and unsustainable practices that threaten its environmental heritage and economic future.  Since 2013, the U.S. government has committed more than $55 million in programs that promote sustainability, improve livelihoods for local communities, bolster governance of natural resources, strengthen actions to stop international wildlife trafficking, and protect thousands of hectares from illegal and unsustainable exploitation.