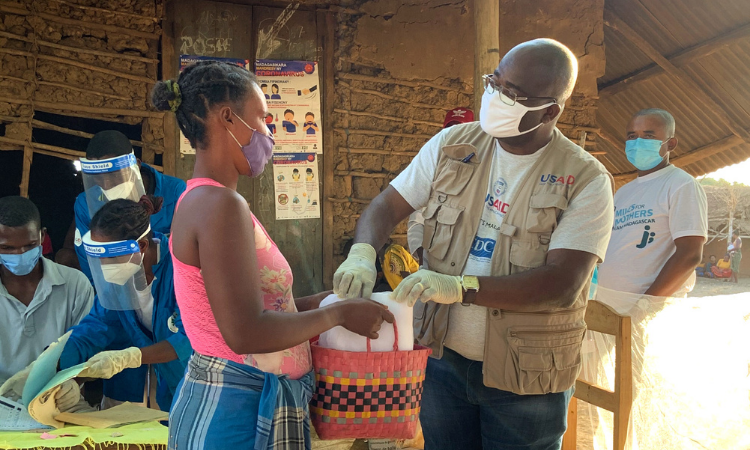 This donation of bed nets continues the U.S. government’s commitment to protecting the Malagasy population from malaria

Malaria remains one of Madagascar’s major public health problems.  It is the fourth leading cause of disease and one of the top reasons people seek care at health centers.  In 2020, nearly two million cases of malaria were reported in the country, almost twice the number of cases reported in 2019.

“The United States of America and Madagascar stand side-by-side like ‘mpirahalahy mianala’ as we strive to ensure the good health of the Malagasy people,” said U.S. Ambassador Michael Pelletier in making the announcement.  “Mosquito bed nets are an extremely simple and effective method to prevent malaria, but I want to emphasize they must be correctly used and cared for.”

The NMCP recommends sleeping under an insecticide-treated net every night, hanging them carefully above sleeping spaces during the day so the nets are not damaged, washing them only with water, and keeping them away from direct sunlight.  These nets block mosquitoes from biting, which prevents transmission of the parasite that causes malaria.  Malaria is a severe illness that can result in death and is particularly dangerous for young children and pregnant women.  Malaria has many other impacts that hinder the socio-economic development of families and of the country in general, including preventing people from going to work and children from attending school.

The U.S. donation of 3,667,000 bed nets is part of a national campaign by the NMCP, starting in August 2021, to distribute 14 million LLINs to families in 101 districts of Madagascar.  The additional 10 million nets will be donated by the Global Fund to Fight AIDS, Tuberculosis, and Malaria (the Global Fund), which receives one third of its funding from the U.S. government.  The NMCP and the Global Fund will work with the USAID IMPACT project to distribute the nets.  In total, enough bed nets will be provided to protect 26 million people, roughly the entire population of Madagascar.

The United States is the largest single-country donor to Madagascar’s health sector, providing $72 million in 2020 alone to fund health activities managed by USAID.  Thisincludes $26 million specifically targeted for malaria prevention and treatment.  Over two decades, global efforts have saved 7.6 million lives & prevented 1.5 billion cases of malaria. Affected countries achieved these results with help from the U.S. – the largest malaria donor – including $8 billion in investments from PMI over the last 15 years.

Through USAID and PMI, the U.S government takes a wide range of actions to protect the Malagasy people from malaria and has been a consistent contributor to Madagascar’s national bed net distribution campaigns.  We also fund annual indoor residual spraying campaigns where, at the start of the malaria season, insecticides certified as safe for humans are sprayed inside homes and public buildings to ward off mosquitoes in targeted districts with high malaria rates.  In 2020 alone, we donated more than two million malaria rapid diagnostic tests and nearly two million courses of treatment to cure those who test positive for the disease.  And we are working closely with Malagasy public health officials to achieve the ultimate dream — completely wiping out malaria in some districts of the country.