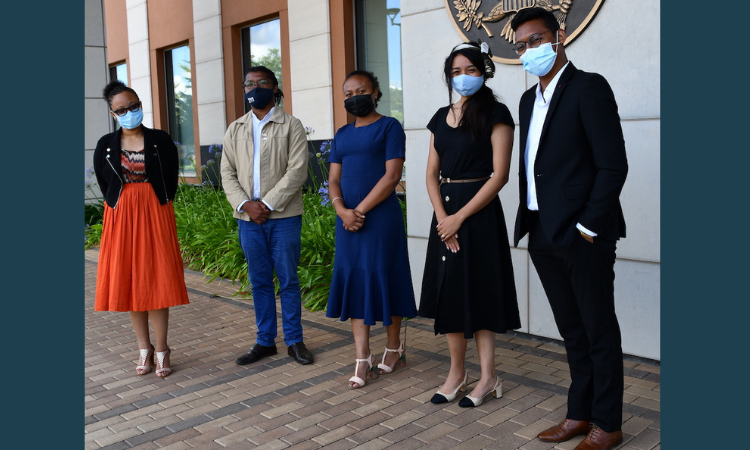 The U.S. Embassy in Madagascar and Comoros is pleased to announce that Marie Christina Kolo and her team have won the U.S. Department of State’s 2020 Alumni Engagement Innovation Fund (AEIF) award for their project Women Break the Silence.  Projected to begin in January, this project seeks to support victims of sexual violence, to combat the stigma around sexual assault, and to raise awareness of laws against gender-based violence.  The project will focus on Antananarivo, Antsiranana, Tamatave, Ambovombe, Fianarantsoa, Nosy Be, and Mahajanga.

An ecofeminist, social entrepreneur, and climate activist, Kolo was selected as a Mandela Washington Fellow in 2017.  In 2018, she co-founded Ecofeminism Madagascar, a national platform that promotes gender inclusion in climate change discussions.  Kolo also founded Green N Kool, a social business that works with vulnerable women and former sex workers in Madagascar.

For the project Women Break the Silence, Kolo has surrounded herself with a team of accomplished Malagasy leaders: Riambelo Onjaniaina Rasamimanana, Daniela Loberline Ratiarisoa, Tsimihipa Andriamazavarivo, and Rado Harintsoa Rakotosamimanana, all of whom have participated in the U.S. Department of State’s Young African Leaders Initiative program.

“It was natural for us to support each other.  We all have the same goal, and we value collaboration over competition,” explained Rasamimanana, a team member, the country director for the Women Lead Movement in Madagascar, and a trained lawyer.

Through this AEIF award, the team will collect testimonies and data on sexual harassment and sexual assault in high schools and universities.  This information will be used to create art, board games, and other innovative tools to raise awareness about sexual violence and help victims move through their trauma.  In the future, the team hopes to create centers that welcome — and in some cases, shelter — victims of gender-based violence.

AEIF is a worldwide competition organized by the U.S. Department of State’s Bureau of Educational and Cultural Affairs (ECA).  Kolo is the fifth U.S. government alumni from Madagascar to win an AEIF award.  Previous Malagasy winners include Ketakandriana Rafitoson in 2012, Mirana Razafindramboa in 2015, Adrienne Andriantsialonina in 2016, and Manoa Rakotoarison in 2018.

This year’s AEIF competition focused on women, peace, and security.  More than 300 competitive applications were received, with 80 teams from 67 countries ultimately winning.

Since its inception in 2011, AEIF has funded nearly 500 alumni-led projects around the world.  AEIF supports alumni initiatives that promote shared values and innovative solutions to global challenges.

As ECA Assistant Secretary of State Marie Royce said in a video, “AEIF takes the value of exchange programs further,” giving alumni the tools they need to support their local communities and a chance to apply the skills they developed on their exchange programs.