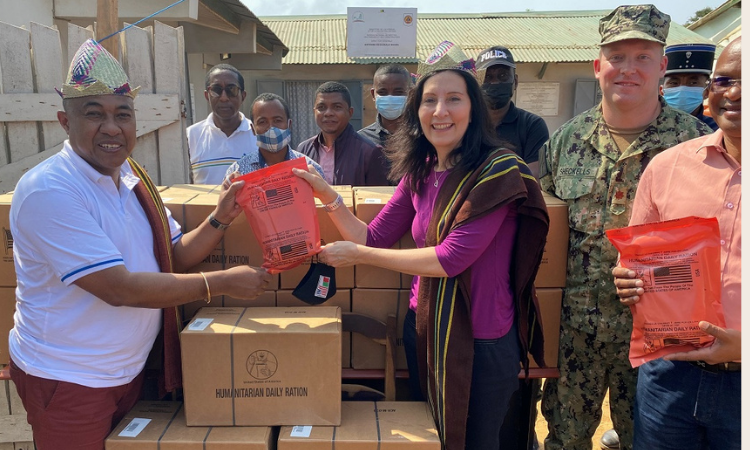 “This $2.1 million contribution by the U.S. Department of Defense is part of the U.S. government’s unwavering support for the Malagasy people facing food insecurity in the South and the Government of Madagascar’s response to the crisis,” Chargé Hyatt said.

These pre-packed humanitarian meals are designed to meet daily nutritional needs, delivering no fewer than 2,200 calories per meal. The amount donated today could feed an estimated 2,100 people, in both Beloha and Tsihombe, for 90 days.

The donation was made possible by the U.S. Department of Defense’s Defense Security Cooperation Agency (DSCA), which supplied the humanitarian daily rations valued at $1.6 million, and U.S. Africa Command (USAFRICOM), which provided $520,000 of humanitarian assistance funding to ship the rations to Madagascar. Catholic Relief Services will implement the project in coordination with BNGRC, and the Sisters of Charity in Ambovombe will ultimately distribute the meals at their canteens.

According to the Integrated Food Security Phase Classification (IPC), 1.35 million people in southern Madagascar are projected to be food insecure or worse this lean season. The U.S. government will continue to support Madagascar’s efforts to provide essential human services to vulnerable populations. Since 2015, the U.S. government has been the leading provider of assistance to the south, committing more than $236 million through USAID to respond to the urgent needs of families in hunger and provide long-term solutions to food insecurity.