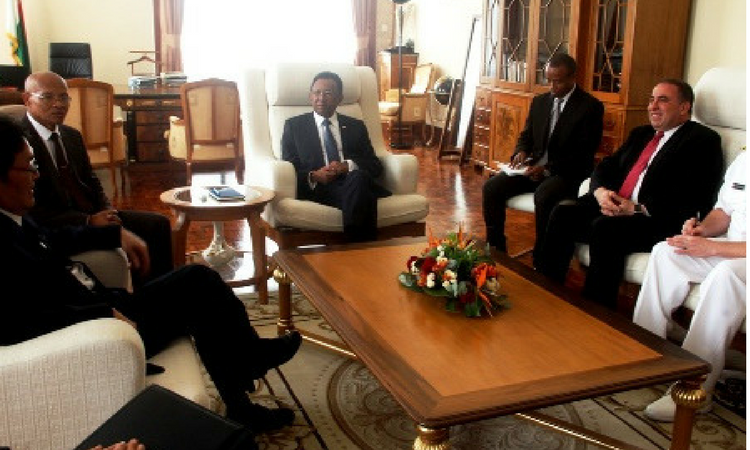 A delegation led by Alex Laskaris, the Deputy to the Commander for Civil-Military Engagement (DCME) from United States Africa Command (U.S. AFRICOM), accompanied by Ambassador Robert T. Yamate, paid a courtesy call to President Rajaonarimampianina at Iavoloha Palace today. The visit was part of the U.S. AFRICOM tour in the Indian Ocean region. The delegation arrived in Madagascar on May 8, after a two-day visit in Comoros, and will leave for Mauritius this evening.

U.S. AFRICOM is one of the U.S. Defense Department’s six geographic combatant commands and is responsible to the Secretary of Defense for military relations with African nations, the African Union, and African regional security organizations. Since its creation in 2007, Madagascar has had a good relationship with U.S. AFRICOM. General William E. Ward, the then-commander of U.S. AFRICOM, visited Madagascar in January 2009. Starting in 2015, the Malagasy Navy has participated in the maritime exercise Cutlass Express, sponsored by U.S. AFRICOM and held in the vicinity of Mauritius and Djibouti. In 2016, Madagascar hosted Africa Endeavor 16, an annual U.S. AFRICOM-sponsored training and information-sharing effort to help develop African multi-national communication interoperability for African Union and United Nations mandated peacekeeping and disaster response in Africa.