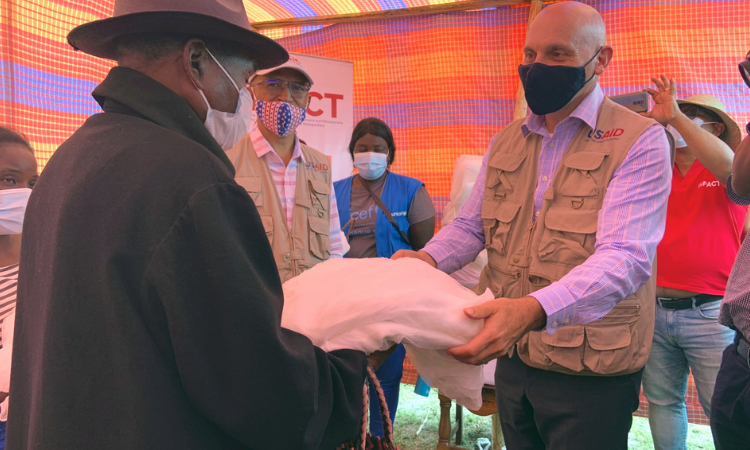 With a contribution of more than 3.6 million bed nets from USAID, the national mosquito bed net campaign will protect over 22 million people from malaria

The U.S. government steadfastly supports Madagascar’s efforts to protect its citizens from the dangers of malaria.  Since 2008, the U.S. government, through the United States Agency for International Development (USAID) and the President’s Malaria Initiative, has provided technical and financial support to the Ministry of Public Health’s National Malaria Control Program, (NMCP) which has saved thousands of lives.

Malaria is one of the most critical public health challenges facing Madagascar.  In 2020, nearly two million people in Madagascar were diagnosed with malaria and hundreds of people died from the disease.  For many coastal communities in particular, malaria is a persistent threat.  The national bed net campaign distributes millions of mosquito bed nets to families around the country, minimizing this threat.

This year’s mosquito bed net distribution campaign, launched a few days after World Mosquito Day, is led by the NMCP, with support from USAID, the Global Fund to Fight AIDS, Tuberculosis, and Malaria (the Global Fund), WHO, UNICEF, and other NGO partners.  USAID and the President’s Malaria Initiative donated 3.6 million of the 13.7 million mosquito bed nets that will be distributed to people in 101 districts of Madagascar, protecting a total of 22 million people.  The remaining bed nets were provided by the Global Fund.

“A simple bed net can provide so many benefits,” declared U.S. Embassy Deputy Chief of Mission Tobias Glucksman at the campaign launch in Vangaindrano.  “Bed nets keep people healthy and safe from malaria.  Healthier children are able to stay in school and pursue their education and their dreams and healthier parents do not have to miss work, thereby improving their financial wellbeing and Madagascar’s economic growth.”

Each year, USAID commits $26 million towards malaria prevention and treatment in Madagascar.  With this money, the U.S. government provides the equipment and medication needed to test for and treat millions of cases of malaria,  support increased monitoring for cases around the country, improves the performance of regional and district laboratories, and is working with the NMCP to eliminate malaria in some districts of the country.  The U.S. government is proud to be a partner in this fight against malaria, standing side-by-side like “mpirahalahy mianala” with the Malagasy people.