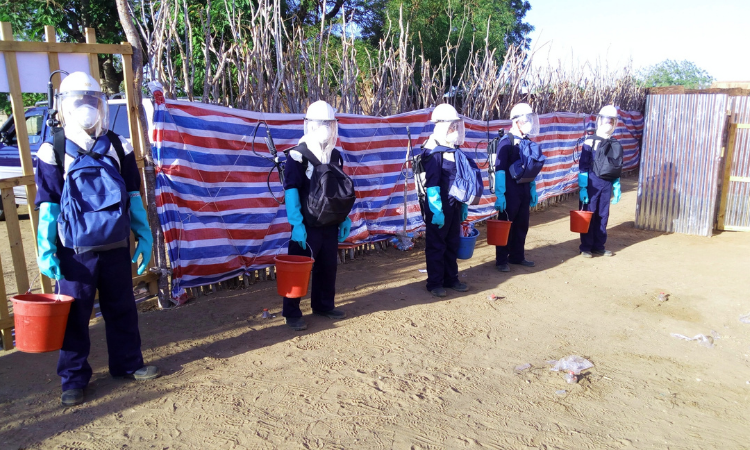 Malaria remains a severe risk to millions of people in Madagascar.  It is the fourth leading cause of disease and one of the top reasons people seek care at health centers.  Since the beginning of the year, over 1.4 million people in Madagascar, 5.6% of the population, have fallen ill with malaria.

The U.S. Government is the largest single country donor to Madagascar’s health sector, providing $62 million each year to fund the United States Agency for International Development’s (USAID) health activities, including $26 million for malaria prevention and treatment.

The U.S. Government has funded annual indoor residual spraying (IRS) campaigns in Madagascar since 2008.  Through IRS, an insecticide is applied to the walls and ceilings of homes and public buildings.  The campaign is conducted just prior to the start of the malaria season in targeted districts with high malaria rates.  Residual insecticides effectively kill mosquitoes that contact the treated surfaces.  The treatment is certified as safe for humans by the World Health Organization, remains effective for seven to eight months, and kills 80% of mosquitoes.

This year’s IRS campaign has begun and is a collaboration between the U.S. Government, through USAID and the U.S President’s Malaria Initiative (PMI), and the Madagascar Ministry of Public Health’s National Malaria Control Program (NMCP).  The campaign’s goal is to spray at least 85% of the homes in five districts with high malaria rates.  The campaign will protect an estimated 1.1 million people, including 53,000 pregnant women and more than 200,000 children under five years old.

“Sadly, malaria continues to threaten the health and well-being of the Malagasy people,” said USAID Mission Director John Dunlop.  “The indoor residual spraying of insecticide to keep mosquitos out of homes is one of the key strategies we use to control malaria.”

This year’s IRS campaign is the latest in a series of combined efforts between the U.S. Government and Madagascar’s Government to protect the Malagasy people from malaria.  When IRS is combined with other malaria control activities the risk of getting this dangerous disease is significantly lower.  USAID’s program of anti-malaria activities in Madagascar includes encouraging people to sleep under long-lasting insecticide-treated bed nets, providing preventive treatment to pregnant women, and quickly identifying and treating people who have malaria.

In February, the U.S. Government distributed one million mosquito bed nets in 12 high transmission districts of Madagascar.  In August, U.S. Ambassador Michael P. Pelletier announced the donation of more than two million malaria rapid diagnostic tests and nearly two million courses of treatment to cure those who test positive for the illness.  And in September, USAID and PMI donated 65 tablet computers to help the Government of Madagascar eliminate malaria in the districts of Antsirabe II and Antsiranana I.

Under this year’s IRS campaign, the National Malaria Control Program, in partnership with USAID and PMI, will carry out IRS activities in five health districts in two regions of the country with high rates of

The program includes monthly monitoring to ensure treatments remain effective.  All operations are performed in compliance with recommendations to prevent COVID-19 transmission.

The United States Government, through USAID, has been working together with the Government of Madagascar and local partners for 36 years to promote the health and prosperity of the Malagasy people.  Last year USAID assistance totaled $114 million, including $62 million in activities for the health sector, where the U.S. is the largest single country donor, and $40 million for food security, where the U.S. has been the leading provider of food assistance to the drought-stricken south since 2015.