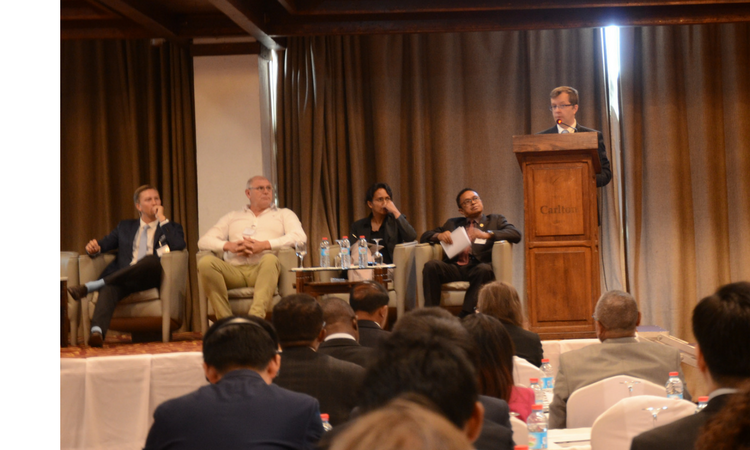 Thank you for the invitation to speak at this important and very interesting event.

It’s great to be with everyone this morning. Although I’ve just arrived in Madagascar, it’s already clear to me how important energy, and in particular renewable energy, is to this country’s development and its future.

Without reliable electricity, Madagascar will never develop its economic or human potential.  Without clean energy, threats to Madagascar’s human population and wildlife will continue to endanger most everything that makes this island unique.

Today I’d like to address three areas with you: first, I’d like to discuss how the U.S. sees the state of Madagascar’senergy sector today; second, I’d like to highlight business opportunities, especially in renewable energy; and, third, I’d like to tell you how we at the Embassy and the U.S. government, along with the U.S. business community in Madagascar, can support you.

The United States and the international community are aware of the weaknesses of this sector, and the challenges it creates.

For the last three years, Madagascar has ranked dead last in the World Bank’s “Doing Business” indicator, in regard to the difficulty, delay, and cost of getting electricity.

Only 15 percent of the population has access to energy.

In rural areas, this drops to 6 percent. This is a result of the lack of generation capacity, poor maintenance of existing generating facilities, and significant transmission and distribution constraints.

This lack of electricity is a huge drag on the economy and is keeping foreign investment from flowing in, which could create jobs for the young population.

However, it also represents a tremendous opportunity for U.S. and other international businesses.

For example, getting existing resources to work would be a good first step in relieving the severe power shortages that plague the country.

Today, Madagascar is only generating half of its official capacity, because of years of neglect and insufficient maintenance.

the Mandroseza Power Plant here in Antananarivo, raising its production from 2 to 40 megawatts.

As U.S. Ambassador Robert Yamate noted at the inauguration event, this two-and-a-half-year effort succeeded in bringing much-needed electricity to thousands of people in the city.

It was not an easy road. There were plenty of challenges along the way.  But through perseverance and hard work, Symbion was able to succeed in Madagascar’s power generation market.

Thermal power, especially if it utilizes lower-cost domestically-produced heavy fuel oil, can help with immediate power needs in Madagascar’s existing electricity grids.  But in the long term, it cannot meet all of the country’s tremendous potential demand.

Madagascar’s long-term energy future, like the rest of the world’s, lies in renewable energy.

This is why Symbion Madagascar plans to develop additional power plants throughout the country, using not only domestic oil, but also renewables like biomass and solar.

And another U.S. company, Fluidic, is about to launch a pilot project to provide off-grid solar power with battery backup, to remote communities in Madagascar.

Fluidic,and its local partnerHenri Fraise,signed an MOU with the president to bring electricity to 100 villages within 2 years using these systems.

The Ministry of Energy is going to host a formal ceremony tomorrow with representatives from Fluidic and Henri Fraise, as well as the Minister of Energy and Ambassador Yamate.

The success of Symbion and Fluidic shows that when U.S. investorshave an open and level playing field and are working with local partners – they are ready to supply market-based solutions to help Madagascar meet its tremendous demand for affordable and clean energy.

The Embassy and the U.S. government stand ready to support these efforts.

We have several programs that can help businesses succeed in Madagascar’s energy market.

First, we have the U.S. government’s Power Africa program.

By working with more than 140 public and private sector partners, Power Africa seeks to add 30,000 megawatts and 60 million connections in sub-Saharan Africa by 2030.

It draws on the combined expertise and abilities of 12 U.S. Government agencies, the World Bank, the African Development Bank, the International Renewable Energy Agency, African governments, more than 130 private sector partners, and the governments of Sweden, Norway, Canada, the UK, , Japan, France, as well as the European Union.

USTDA is partly funding the Fluidic-Henri Fraise project, with a grant of 804 thousand US dollars.

Fluidic will provide the other half of the project’s 1.6 million-dollar cost.

In addition to the services available from the U.S. government, I would urge any business considering Madagascar to get in touch with the American Chamber of Commerce.

AMCHAM, As we often call it represents large and small U.S. businesses with a wealth of experience in navigating the waters of Madagascar’s private sector.

They are an invaluable source of information and support for businesses, as well as networking opportunities with other established businesses.

In summary, the challenges facing Madagascar in energy generation, storage, and distribution are significant.

But so are the potential benefits to investors and consumers.

The United States is ready to help American and Malagasy partners work together to help Madagascar meet the needs of its citizens and its growing economy.