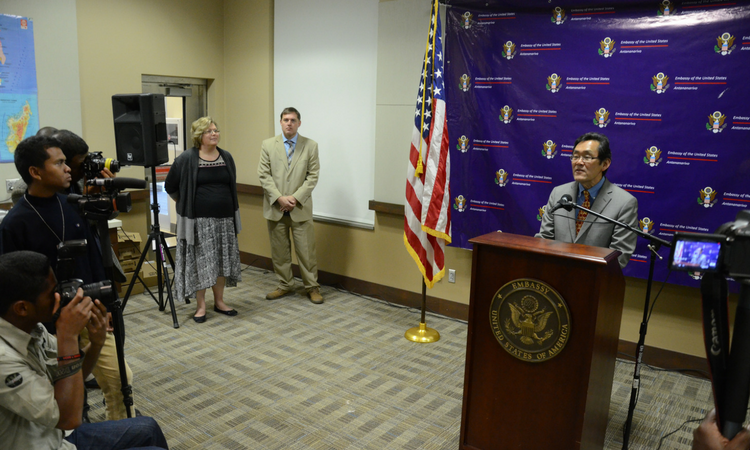 Thank you all for coming today to cover this momentous occasion – the results of the 2016 U.S. Presidential Election.

Since our country’s founding, the electorate in the United States has progressed from one where only a small portion of the population could vote, to one where any citizen age 18 or older, no matter what race, gender, ethnicity, or religion, has the right to vote.

One of the greatest strengths of the United States is our diversity, and the fact that so many Americans, take so very seriously, their privilege and responsibility to participate in our democracy – this is something that I am very proud of.

There were many races being decided in addition to the Presidency.  We had hotly contested races for the U.S. Senate and House of Representatives, in addition to judges, school board members, mayors, and local referenda of all types.

However, I do know that many of us here today are most focused on the Presidential contest.

This has been a campaign and election cycle like none other, and I first would like to recognize Hillary Clinton’s success in becoming the first female major party nominee.  She ran a courageous and ethical campaign, and we thank her for her graciousness and diplomacy in conceding the election to the new President-elect of the United States of America, Donald J. Trump.

Mr. Trump, a native of New York, is an American success story and has worked to continually set the standards of excellence over the course of his career while expanding his interests in real estate, sports and entertainment. He is a graduate of the Wharton School of Finance and an accomplished author of 15 books.

I congratulate President-elect Trump, his wife Melania, and his entire family on his historic victory.

Both candidates in this election fiercely argued that the Constitution of the United States, which defines our government and is the basis for our most treasured freedoms, is and must continue to be the supreme law of the land.  The Constitution of the United States has been the foundation of our political stability since 1789, and nothing about that is going to change with the new administration.

And I do not expect that much will change in regards to our policy toward Madagascar.  Republicans and Democrats have long agreed on the core principles that continue to guide U.S. activities in Madagascar.

Democrats and Republicans have worked together to pass and extend AGOA.  They collaborated on major health care and development program initiatives for USAID.  Democrats and Republicans believe that in the long run, Madagascar needs trade more than aid to ensure its long term well-being.  And they agree that economies are made stronger through stable, transparent, and well-run democracies.

Of course, important things will change with the new Administration, come January.  There will be a new face in the Oval Office, and new people in leadership positions throughout government.  They will come with their own ideas, priorities and new programs they will want to put in place, just as President Obama introduced the Young African Leadership Initiative, which has now become an institution in the Department of State and USAID.

The United States of America will always remain committed to working in partnership with the people of Madagascar.