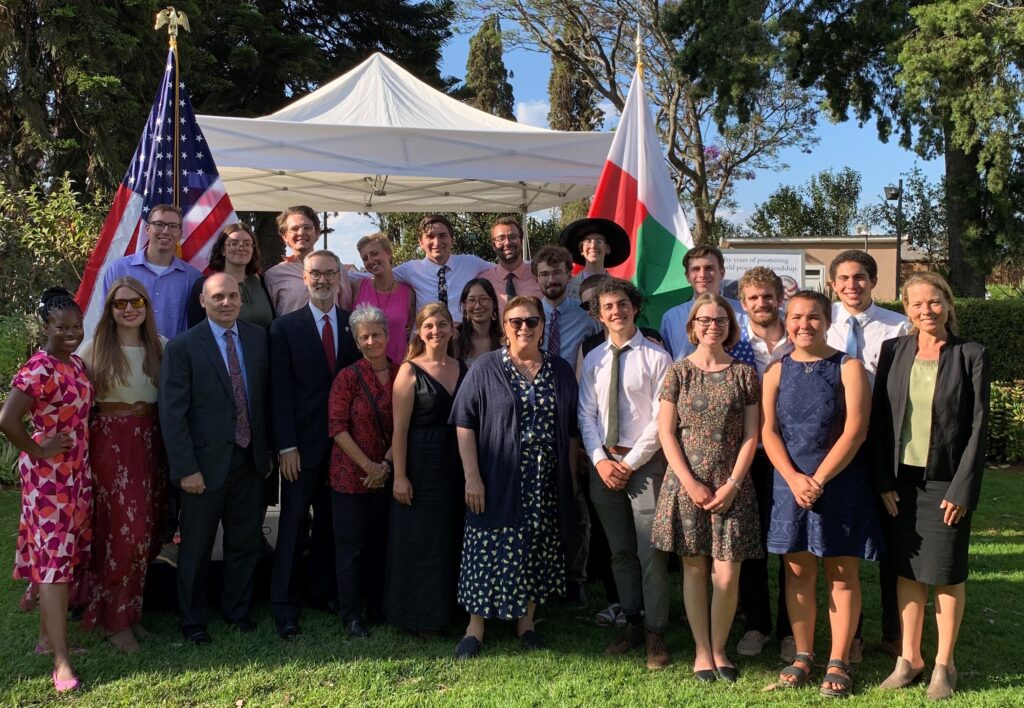 ANTANANARIVO – U.S. Peace Corps Volunteers are back in Madagascar!  Nineteen new Peace Corps Volunteers were sworn-in by U.S. Ambassador Claire Pierangelo in Antananarivo today, marking the return of the first new group of Volunteers since the global evacuation of Volunteers in March 2020 due to the Covid-19 pandemic.  The Volunteers have completed eleven weeks of training in Malagasy language and culture, as well as in technical skills prior to their swearing-in.  Now they will move to their project sites around Madagascar where they will serve for two years.  Fourteen of the new Peace Corps Volunteers will teach English and train Malagasy English teachers at CEGs, lycées, and universities, while five will promote climate-smart vegetable gardening in rural areas to address malnutrition.  Another two are expected to swear-in in a few days, bringing the total to 21 new Volunteers.

Ambassador Pierangelo noted that the Volunteers will be ambassadors of American culture.  “Every day you will be representing the United States and our values,” she said.  “I have no doubt that you will show the Malagasy people the best of America.”

The Secretary General of the Ministry of Agriculture, Fanja Raharinomena, noted, “We are delighted that these Peace Corps Volunteers are back with us today, after a suspension of service for over two years.”  Directing his remarks to the new Volunteers, he added, “Many families and individuals have testified about their interaction with your predecessors.  We are sincerely grateful for these very positive and enriching encounters.  And we are confident of your continued dedication, to help address the development challenges in your respective communities.”

Peace Corps’ country director for Madagascar Brett Coleman remarked, “This is a historic day for Peace Corps Madagascar.  For two and a half years, we’ve been looking forward to this day.  We are thrilled to renew our partnerships with the local communities where Peace Corps Volunteers serve, to help them achieve their own community-identified priorities for development.”

Peace Corps Madagascar expects 35 new Volunteer trainees to arrive in February 2023 to support local health initiatives, including maternal and child health and water, sanitation, and hygiene.  The Peace Corps plans to rebuild its Madagascar program to the pre-pandemic level of 150 active Volunteers over the next two years.

The Peace Corps was founded in 1961 by U.S. President John F. Kennedy.  Since its founding, the Peace Corps mission to promote world peace and friendship has remained unchanged.  More than 241,000 Volunteers have served in 141 countries since 1961, including 1,595 in Madagascar.