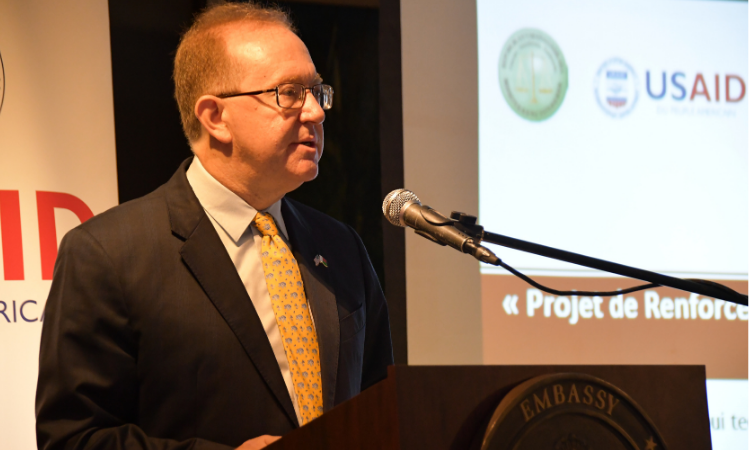 U.S. Ambassador Michael Pelletier and the First President of the Supreme Court of Madagascar Rajaona Andriamanankiandrianina announced a new $4 million U.S. governmentfunded program that will build the capacity of Madagascar’s Court of Accounts and improve the management of public funds.

The Court of Accounts is Madagascar’s supreme audit institution responsible for auditing and judging all public expenditures, as well as conducting policy evaluations for the national assembly. Ambassador Pelletier said, “The United States of America and Madagascar are like ‘mpirahalahy mianala’ as we work together to foster prosperity for Madagascar by building effective, accountable, and inclusive institutions…. An independent, reliable Court of Accounts is an essential element of all well-run, democratic nations and we are proud to support the Court of Accounts to enhance the abilities of its staff, improve the quality of its audits, and expand its mandate.”

The five-year “TANTANA” program is funded by the United States Agency for International Development (USAID) and will improve the court’s internal governance, strengthen communication and public engagement, and enhance the quality and impact of the audits and judgements produced by the court.

In addition to the funding from the U.S. government, the Courts of Accounts of France and Morocco, as well as the Office of the Auditor General of Norway, are contributing to the program by sharing staff time and expertise with Malagasy auditors. The program will be implemented by the INTOSAI Development Initiative on behalf of USAID.

During the ceremony, the President of Madagascar’s Court of Accounts, Mr. Jean de Dieu Rakotondramihamina stated, “The Malagasy people deserve an independent, visible, and credible Court
of Accounts. Today, we are strengthening our institution, so that the country can be confident in the management of public money.”

USAID has worked for 36 years to help the Malagasy people accomplish their development goals in the face of ongoing challenges. Last year, USAID assistance totaled $114 million, including $62 million in activities for the health sector, where the U.S. is the largest single country donor, and $40 million for food security, where the U.S. has been the leading provider of food assistance to the drought-stricken south since 2015.