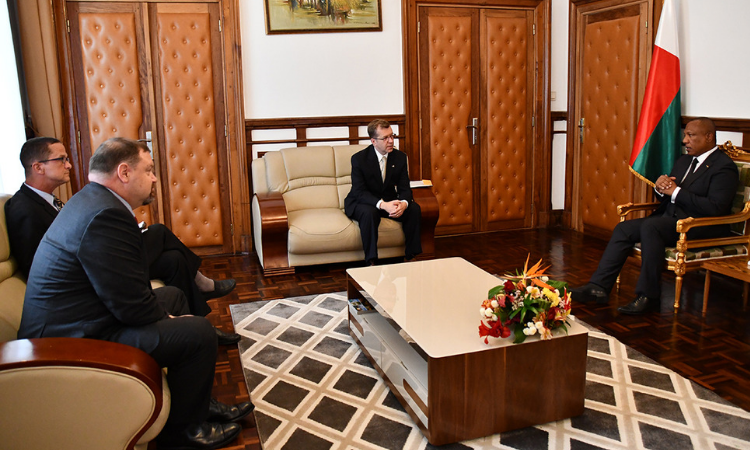 ANTANANARIVO — On November 30, 2018, U.S. Chargé d’Affaires, Stuart Wilson, accompanied by USAID Mission Director John Dunlop and Political Officer Thomas Brouns, met with Prime Minister Christian Ntsay, at the Prime Minister’s Office in Mahazoarivo.  The discussion was centered on the issue of Trafficking in Persons (TIP).  The Chargé d’Affaires emphasized his appreciation for the Prime Minister’s leadership on this important topic, particularly the government’s adoption of the decree to set up the organization of the National Office in charge of fighting human trafficking (“Bureau National de Lutte contre la Traite des Etres Humains”).  In addition, the U.S. Government recognizes the Government of Madagascar’s contribution in the implementation of Madagascar’s Action Plan – a useful tool to coordinate the actions and efforts of the various ministries and stakeholders.

As part of its commitment to address this issue, the United States has awarded a $750,000 grant to the International Organization for Migration (IOM) to improve capacity among law enforcement and the judiciary, to ultimately improve investigation and prosecution of traffickers.  Part of this contribution has been earmarked to update Madagascar’s National Action Plan, which expires at the end of 2019.