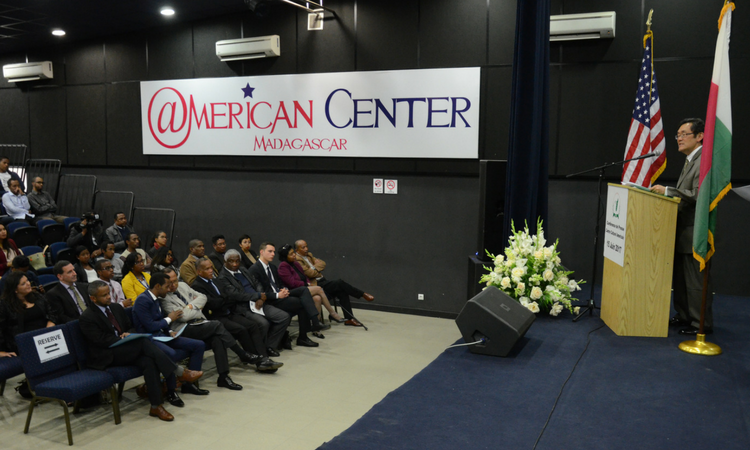 It was almost a year ago that I congratulated members of the 12th cohort for successfully completing their year of seminars at the Center of Diplomatic and Strategic Studies of Madagascar – C.E.D.S.  It is an honor for the Embassy ​​and for me, to continue to serve as a sponsor for the 12th cohort.  We are pleased to have such a strong relationship after serving as a mentor last year.

Last year, CEDS members went to my home state of California for their study trip to the United States.  There they learned about a remarkable platform called the Open Government Partnership (OGP).  OGP’s mission is to strengthen participatory democracy and give citizens a sense of ownership and involvement in their democracy and national development.  OGP draws on a global network of stakeholders who share best practices and strategies that have worked in their own countries.

Launched in 2011, OGP is an international platform for domestic reformers committed to making their governments more open, accountable, and responsive to citizens.  Today, OGP members in 75 countries have secured concrete commitments from their governments to promote transparency, empower citizens, fight corruption, and harness new technologies to strengthen governance.

In order to apply the principles and techniques of OGP in Madagascar, the 46 leaders of the 12th CEDS cohort created HOPE or “Hetsika Olom-Pirenena Entanina” in Malagasy, or “Movement: Committed Citizens” in English.  HOPE is a non-partisan association that seeks to engage Malagasy citizens to become better informed and to actively participate in public policy decisions.  At the same time, it seeks to develop partnerships between the government and its citizens to make government more open, accountable, and responsive to the needs of the governed.

HOPE will organize monthly discussions among civil society leaders, government officials, academics, members of the international community, and the general public.  They will debate topics including human rights, justice, education, fiscal policy, and elections, and develop new solutions to tackle stubborn national problems.  The U.S. Embassy looks forward to contributing to these discussions, including by sponsoring some of them here at the American Center.

We share with the HOPE Association the democratic values of openness, transparency, accountability, and broad engagement with citizens.  We firmly believe that informed citizens, working hand-in-hand with their government, produces better public policies.  We also look forward to working with HOPE, the CENI, and other international partners to ensure that the upcoming national elections in 2018 are free, fair, inclusive, and transparent.

The United States intends to provide $1.2 million of technical assistance and training to CENI to enhance its technical skills and professional expertise to effectively administer the elections.  This is part of our work with UNDP and other donors to support the CENI’s election needs through a collective package of assistance.

It is our honor and pleasure to support the HOPE association to deepen citizens’ engagement with their government, provide greater access to information, and promote transparency and accountability in government.  Together with CENI, with civil society partners such as CEDS, and with our international partners, the United States will work to help Madagascar organize successful elections that strengthen democracy, encourage rule of law, and promote national development.