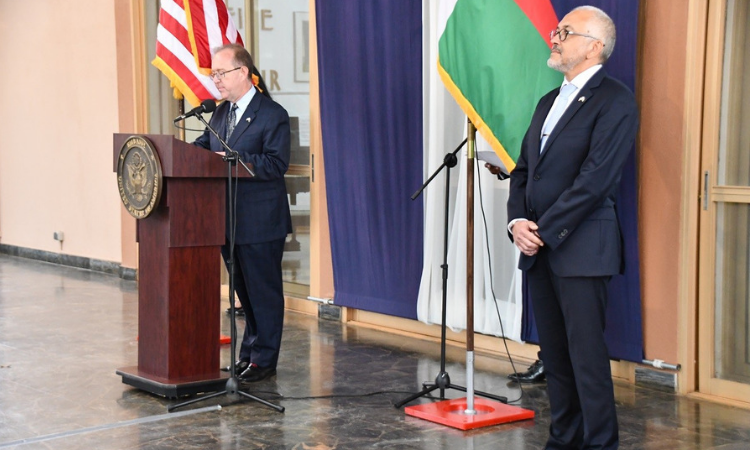 Distinguished guests and friends, thank you for joining us to celebrate the 243rd anniversary of the independence of the United States (and over 150 years of friendship between our two countries).

It is fitting to gather here at Villa Philadelphia, since it was in the city of Philadelphia that on the 4th of July 1776, the Declaration of Independence was approved by the Continental Congress, paving the way for what would eventually become an independent and united nation. It was in Philadelphia that our courageous founding fathers stood by their principles and put their signatures, their lives, and their fates on what would become the most important document in our country’s history. And it was in Philadelphia, on that fateful July 4, against all odds, that this bold idea turned into an affirmation, telling the world that “these United Colonies are, and of right ought to be, free and independent states.” Those decisive words enshrined in our Declaration of Independence gave birth to our great nation, which eventually grew to 50 states, whose flags are represented here today, including my home state of Maine.

Ladies and gentlemen, it is my distinct honor to represent these United States and on behalf of my family and the whole Embassy team, it is our sincere pleasure to welcome you to Villa Philadelphia to celebrate our nation’s independence and to reaffirm our great friendship.

Next week, across our country and throughout the world, Americans will come together to celebrate our independence- just as Malagasy did two days ago here! Just as you did, we will watch fireworks and have our patriotic parades. Some of us will barbecue with friends; others will picnic with their family. These traditional gatherings are as old as our very nation. In fact, John Adams, one of the signers of the Declaration of Independence, described his idea for a “great anniversary festival” to his wife as a “parade, with shows, games, sports, balls, bonfires, and illuminations from this time forward, forever more.”

Speaking of illuminations, my family and I were so excited to learn that our two nations share a similar Independence Day tradition of lights, as we saw the children parade with the colorful Arendrina or hand-made lanterns that light up the night. This is a beautiful tradition that not only highlights your nation’s pride but also its rich artistry. I understand we are lucky to see more and more locally-made and crafted arendrina this year – celebrating authentic Malagasy crafts and creativity and supporting the local economy!

For Americans, July 4th is a time to come together, to enjoy and celebrate, but also to reflect on our collective values and the principles of our diverse country, for which so many have sacrificed so much. Despite their differences, they were unified by one simple truth: that we are all created equal with certain inalienable rights. And for more than 200 years, generations of Americans have stood by this truth and have fought – and even died – to uphold our principles and our values.

Our founding fathers, like present-day Americans, come from different backgrounds and different walks of life. America does not belong to one person or even to one group. It is a multifaceted collection of ideas and contributions from generations of immigrants who worked together to achieve a greater purpose. This is yet another example of the values that bind our two countries. The Malagasy proverb “Ny tao trano tsy efan’ny irery” sums it up well. Building a house is not done by one person; in fact everyone contributes a brick to build that house and together we strengthen its foundation.

As Madagascar continues to build and strengthen its own foundation, we will continue to be its close partner and contribute our own bricks: “anjara biriky.”

We will continue to build cultural bridges between our nations and its peoples. We will continue to bolster our political, economic, social, environmental, and military cooperation. We will continue to support education through scholarships, fellowships, and exchange programs. And we will continue to promote food security and strengthen health systems through the work of our USAID colleagues and Peace Corps volunteers working tirelessly with local partners across the most remote reaches of this beautiful nation.

Today, over three hundred million Americans come from a number of different ethnicities, cultural backgrounds, and religious affiliations. We, Americans and Malagasy alike, need the contributions of all to help make for ourselves that “more perfect union” for which we will always be striving, just as you here in Madagascar need the contributions of all Malagasy and of all of Madagascar’s friends. As John F Kennedy eloquently stated in his 1961 Presidential address: “The energy, the faith, the devotion which we bring to this endeavor will light our country and all who serve it. And the glow from that fire can truly light the world. And so, my fellow Americans, ask not what your country can do for you; ask what you can do for your country… My fellow citizens of the world, ask not what American will do for you, but what together we can do for the freedom of man.”
Or as you sing it in your national anthem:

So from the streets of Philadelphia 243 years ago to Villa Philadelphia today, let us celebrate our unyielding commitment to liberty, freedom and democratic principles, which are far greater than the interests of individuals, irrespective of race, religion, level of education, occupation, or orientation. And let us enjoy our hard won freedoms with lights and fireworks and joy, and a toast: to independence, freedom, and democracy, in the United States, Madagascar, and for us all!