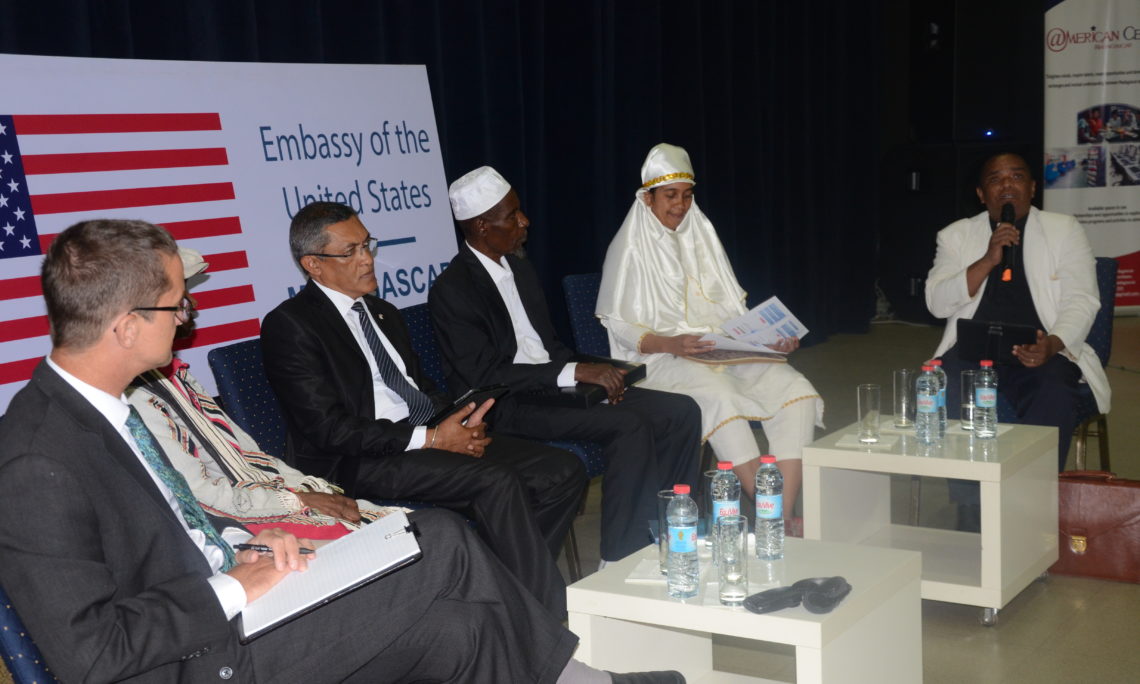 I am so happy to be able to join you today for this important event.  I would like to thank all of those who worked on bringing this event together, which was a direct result of the work our Embassy and members of the religious community put into creating our annual Religious Freedom report in 2016.

The diversity represented in our panel and in our audience is such a testament to one of Madagascar’s greatest strengths, which is not only its diversity, but the ability and willingness of people from diverse backgrounds to work together for common goals, and to live together in harmony.

But this diversity of beliefs, and the mutual acceptance and freedom to worship that exists in Madagascar should not be taken for granted.  Madagascar’s religious freedom exists because of a sustained commitment by each generation to uphold and preserve it.

Sadly, this is not true everywhere in the world.  Most people do not enjoy the benefits of religious freedom that Malagasies and Americans share.  As of 2012, the Pew Research Center estimates that 76 percent of the world’s population lives in countries with a high or very high level of restrictions on religion.

The United States, like Madagascar, cherishes the right of all people to practice their faith freely, without fear or coercion – or to practice no religion at all.  Freedom of religion is such an integral part of our history and our culture.  Many of the first European settlers came to American specifically to ensure their right to practice as they choose.   It is the first right guaranteed in our Constitution, the first phrase our founding fathers included in the Bill of Rights.

But even before the constitution was accepted by the states and our current national government was formed, individual states addressed the question of religious liberty.  On January 16, 1786, the Virginia General Assembly adopted Thomas Jefferson’s landmark Virginia Statute for Religious Freedom.

And to commemorate this historic act, for many years now our Presidents have  declared January 16 as National Religious Freedom Day.  We have organized this discussion in honor of that day, and as a way of strengthening or shared commitment to promoting religious freedom in Madagascar.

Almost 20 years ago, the U.S. Congress established the promotion of religious freedom abroad as a component of U.S. foreign policy.

Globally, the State Department does this through the publication of an annual International Religious Freedom Report which describes the status of religious freedom in every country.  This becomes a tool for human rights advocates, lawmakers and other leaders to gather public support and to advocate for change where it is needed.  We engage with government and religious leaders in countries of concern, and encourage them to modify policies and practices that limit the rights of their people to worship freely.

At the other end of the scale, we partner with civil society and the public in countries like Madagascar, where people are free to worship as they wish, to help identify best practices and to celebrate the shared values that have contributed to the well-being in our respective countries.

The idea to hold this event actually came from some of our participants.  They recognized the religious diversity that exists in Madagascar, and a forum where they could take advantage of this strength of Malagasy society to increase our mutual understanding of each other.

Each of the panelists today have been asked  to address the question whether religious institutions have a responsibility to promote public well-being, and how their traditions view that responsibility.  I encourage you to explore this idea openly, candidly, and respectfully.   For example, what are the responsibilities of religious institutions to reduce suffering, poverty, and possibly even to promote development?  Do they differ from the responsibilities of individual citizens?  How does your faith tradition address the issue of hardship and suffering?

I am hopeful that we may discover that despite our different religious beliefs, we may actually have more in common than we thought.

Thank you again for your participation and your commitment to celebrating and further strengthening religious freedom in Madagascar and beyond.