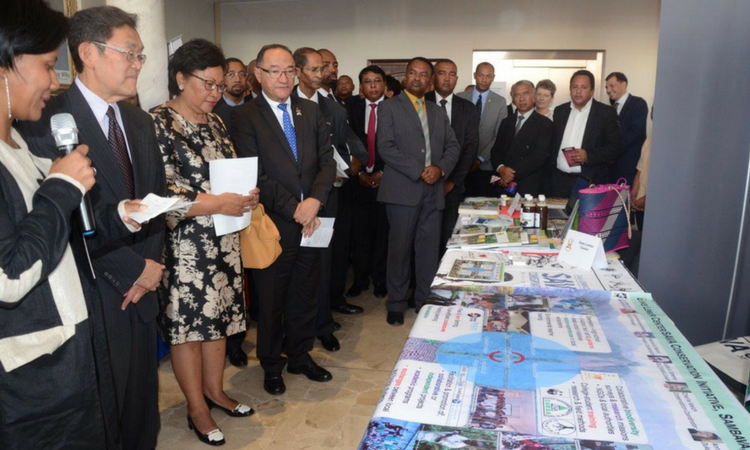 The United States and Madagascar celebrate 150 years of friendship

U.S. Ambassador Robert T.  Yamate, accompanied by a representative of the Malagasy Government launched “America Week” at City Hall Analakely on April 25, 2017.  This is part of the American Embassy’s celebration 150th anniversary of diplomatic relations between Madagascar and the United States.  In his remarks, Ambassador Yamate underscored the importance of the relationship between both countries and said “In the seven decades since then [the independence of Madagascar], through many administrations on both sides, the relationship between the Governments of Madagascar and the United States relationship has undergone many phases.  But throughout it all, the United States has been committed to the people of Madagascar, looking for ways in which we can improve the lives of its citizens and deepen the friendship between our people.” The U.S. Ambassador added that “In the future, I hope to see the economic, cultural, educational grow, through increased trade, through more people coming to study in the United States for higher education, through more tourism – especially ecotourism – on the part of Americans, and through closer cooperation with the political and military leadership of Madagascar”.  U.S. artist Kenny Wesley performed during the opening ceremony of “America Week.”

“America Week” is a two-day program at the City Hall Analakely to showcase the contribution of the American People and the U.S. Government to the people of Madagascar.  It is also to acknowledge the friendship that the Malagasy people have offered in hosting the American Diplomatic Mission, first in Tamatave and now in Antananarivo.  In addition to being able to tour an exhibit outlining the 150 years of relationship, the public will have a have the opportunity to talk with representatives of the Embassy and our implementing partners to learn about how we are working with the people of Madagascar to strengthen our relationship and improve the well-being of the Malagasy people.

American diplomats and other Embassy staff members will make give presentations and take questions during a variety of sessions during the two-day event.  Topics include the work of Peace Corps Madagascar, the application process for non-immigrant visas and the diversity visa, an educational advising session on studying in the U.S. by the EducationUSA.  Deputy Chief of Mission Stephen Anderson will talk about 10 facts you never knew about the U.S. Foreign Policy, and the Chief of the Political and Economic Section will talks about exporting to the U.S.

After a few preliminary rounds, grantees of the English ACCESS Microscholarship Program will participate in the finals of the English language Spelling Bee Contest to test their English skills.

The first treaty between the United States and Madagascar, named “Treaty of Peace, Friendship, and Commerce between the United States of America and the Queen of Madagascar” was signed on February 14, 1867 and amended in May 1883.  The United States was among the first countries to recognize the independence of Madagascar in 1960.  The first U.S. Ambassador to Madagascar, Frederick Bartlett, presented his credential letter to Malagasy President Tsiranana in October 1960 and the first Malagasy Ambassador to the U.S. Louis Rakotomalala presented his credential letter to U.S. President Lyndon Johnson in December 1960.  In 2016, Madagascar exported about USD 450 million of goods to the U.S. and imported USD 42.2 million of merchandise.  Moreover, the United States has been supporting the development of the Malagasy people for over 30 years.  The U.S. Agency for International Development (USAID) currently provides approximately USD 91 million in assistance to the Malagasy people, with programs that include investments in health, food security, environment, and water and sanitation programs.