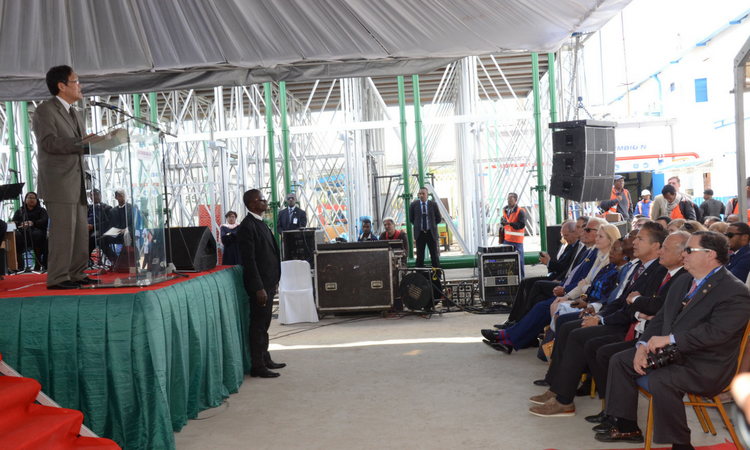 It is an honor and a pleasure to be here today at the inauguration of the Symbion Power plant.  Today’s event is the successful result of the tremendous effort made by Symbion, along with their partners in the Malagasy government, to bring much-needed electricity to thousands of people in Antananarivo.

Symbion is one of the founding members of the United States Government’s Power Africa initiative that aims to increase electricity access throughout Sub-Saharan Africa.

As part of Power Africa, just over two years ago Symbion Madagascar – a partnership between Symbion Power and Vision Madagascar – signed a Protocol Agreement with His Excellency President Hery Rajaonarimampianina to provide reliable, cost-effective electricity to fuel Madagascar’s growing economy.

It has not been an easy road – there were plenty of challenges along the way.  But through perseverance and hard work, Symbion was able to succeed.

I would like to acknowledge the support of President Rajaonarimampianina and the Ministry of Finance, who worked with JIRAMA, Symbion, and the U.S. Embassy to structure a financial system that allowed this project to go forward.

The government of Madagascar has worked hard to eliminate red tape and create an attractive business environment, allowing foreign investment to follow and the country to develop and move forward.

Thanks to these efforts, Symbion has provided 40 megawatts of affordable electricity to JIRAMA, at a time when every megawatt is needed.  The additional electricity also contributed to the successful Francophonie Summit that Madagascar hosted last November.

We look forward to expanding this partnership to meet the growing demands for affordable, reliable electricity in Madagascar.  Symbion Madagascar has plans to develop additional power plants throughout the country using not only heavy oil, but also renewables like biomass and solar.

The success of the Mandroseza power plant has paved the way for other U.S. investors to supply market-based solutions in order to help Madagascar meet its tremendous infrastructure demand, across all domains.

I congratulate all involved on today’s important milestone, and I look forward to working together – and to continued collaboration – between Madagascar and the United States, for the continued benefit of our two great countries.