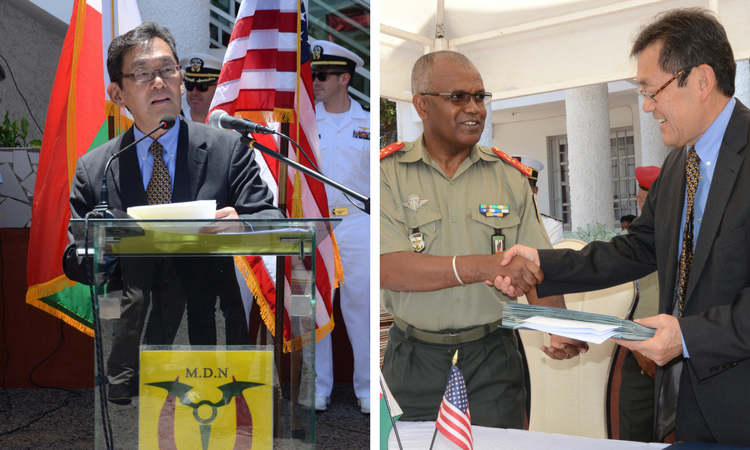 I am honored to be here today to celebrate this partnership that will help advance Madagascar’s health and security sector.  Today’s event demonstrates the strong security cooperation between the United States and Madagascar, and it’s potential for helping both our countries.

The United States Government recognizes HIV /AIDS and as a potential threat to Africa’s regional security, and is committed to assisting partner nations like Madagascar with health services to minimize the pain and suffering caused by HIV/AIDS, and avert the threat of international destabilization due to HIV/AIDS. As a result, the U.S. Department of Defense has been involved in HIV/AIDS prevention since 1999 to reduce the yearly incidence of HIV/AIDS in their militaries through the DoD HIV/AIDS Prevention Program, known as DHAPP.

Today we celebrate the outcome of two DHAPP programs that were made possible with the cooperation and support of the Malagasy Ministry of Defense. The first is a donation of nearly $800,000 of medical supplies from an American NGO called Project C.U.R.E. to be shared between the Centre Hospitalier de Soavinandriana and the Direction Centrale de Service de Sante Militaire. This equipment will not only support HIV/AIDS testing and care, but will also support an array of basic medical services at both hospitals.

With the help of the Ministry of Defense and the US Embassy, representatives from Project C.U.R.E. were able to visit both hospitals in December 2016 and subsequently assembled two shipping containers of medical equipment to support the ongoing work of the dedicated medical professionals who staff these hospitals for the good of the Malagasy people.

Secondly, we are very pleased to announce the first direct donation of medical equipment by the U.S. Department of Defense since 2009. The $24,000 of medical equipment you see here today represents the first step in re-starting direct DHAPP assistance to the Malagasy military. We look forward to expanding DHAPP support in the years to come back to pre-2009 levels when we were able to support six regional clinics spread throughout Madagascar.

While I am very happy to be here today to commemorate the donation of this medical equipment, I would also like to take a moment to recognize the tireless efforts of the medical professionals who work every day caring for the people of Madagascar. Without you, the donation of equipment would be meaningless, and we sincerely thank you for your continued dedication to improving the health of the Malagasy people.

I commend the Government of Madagascar and the Ministry of Defense for their commitment to improving the medical care for the Malagasy people. We are pleased to play a part in this effort, and we look forward to continuing our close cooperation in the future.