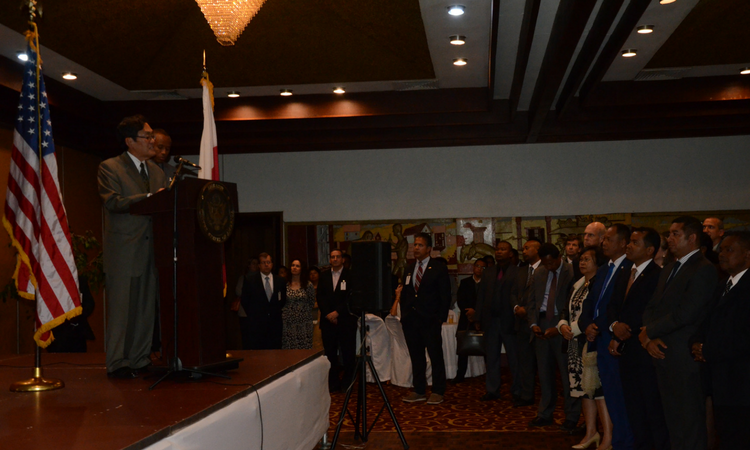 I am so very happy to welcome you here tonight, to honor an extraordinary visit to Madagascar.   Embassy Antananarivo is honored to welcome to Madagascar six distinguished members of the United States House of Representatives, and their spouses and family members, their legislative staff, and military staff supporting their travel.

Chairman Goodlatte is leading the first American Congressional visit to Madagascar since the presidential and legislative elections in late 2013, which marked the beginning of Madagascar’s return to full participation in the international community.

The visits that this Congressional delegation have made today, and especially to the Symbion power plant this morning, are an acknowledgement and a celebration of how far Madagascar has progressed in a short period of time in reestablishing democratic institutions and redeveloping  economic ties with the United States and other long-term partners.  The Congressional Delegation spent a very full day today in frank and productive meetings and visits, learning about the realities of Malagasy life from a variety of viewpoints.

The delegation’s eagerness to hear from people across the spectrum should come as no surprise, since their membership represents so much of the diversity we have in the United States.  They come from states on our Eastern shore – New York and Virginia, and from as far west as Texas.  They come from our northern and southern borders, and states in the center of our country.  They represent cities key to the world economy, like New York and Houston; they represent areas with major academic institutions; and they represent suburban and rural areas with millions of Americans farms, factories and homes.

Our Congressional Delegation members have served in the United States Congress for periods ranging from three to 25 years.  Their voting records in Congress show a diversity of positions on political, economic and social issues.  They are single and they are married, male and female, parents and grandparents.  In short, they are Representatives of the United States of America.

Members of Congress, when you finish your travels and return to Capitol Hill, I know you will remember the many extraordinary people you have met, remember the achievements of ordinary citizens despite overwhelming difficulties, remember the natural wonders of this extraordinary environment, and will continue to help strengthen the wonderful relationship that we Americans have with the Malagasy people.