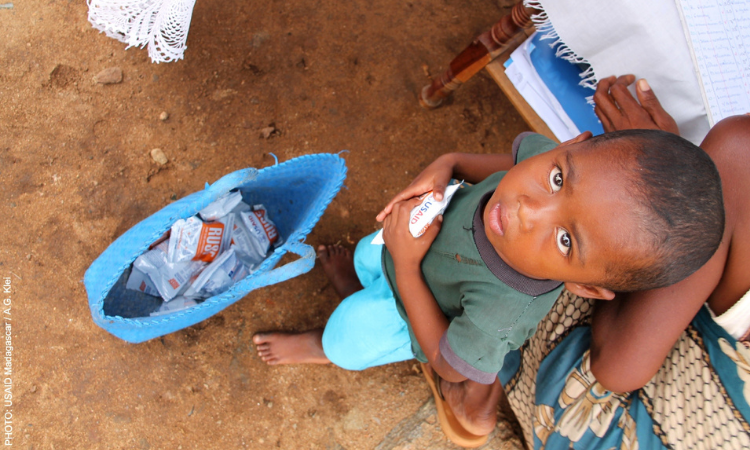 As food insecurity in southern Madagascar becomes more severe, the United States Government, through the United States Agency for International Development (USAID), has provided $2.5 million to UNICEF and the World Food Programme (WFP) to provide treatment for children under five years of age who are suffering from moderate and severe acute malnutrition.

“We are deeply alarmed by the drought-induced malnutrition that is threatening lives in the south of Madagascar,” said U.S. Ambassador Michael P. Pelletier. “With this assistance, 64,000 malnutrition- affected children will be able to receive life-saving treatment.” Both UNICEF and WFP are using the funding to purchase locally produced, specialized, energy-dense food products that are packed full of micronutrients and designed to help children under five years
of age quickly gain weight.

The U.S Government has provided UNICEF $1 million to treat severe acute malnutrition in eight districts; Ampanihy, Bekily, Betioky Sud, Beloha, Tsihombe, Amboasary, Ambovombe, and Taolagnaro. Children with severe acute malnutrition are at great risk of death or long-term health effects. UNICEF provides Ready-to-Use Therapeutic Food, or RUTF, a specialized nutritional supplement that is only distributed under the care of trained health care workers. Any child whose nutritional status still worsens while on the RUTF treatment will be referred to the closest hospital for additional care and treatment.

In a parallel effort, the U.S. Government has provided WFP with $1.5 million to treat moderate acute malnutrition. This diagnosis is a lower, but still serious level of malnutrition. Children at this stage receive Ready-to-Use Supplementary Food (RUSF), a high-calorie nutritional product packed with vitamins and minerals. WFP is using the funding to maintain an existing moderate acute malnutrition treatment program in the districts of Amboasary, Ambovombe, Ampanihy, and Bekily. Under this program, children from 6 to 59 months are actively screened to determine their nutritional health. Children identified as needing additional care receive treatment until their nutritional health recovers.