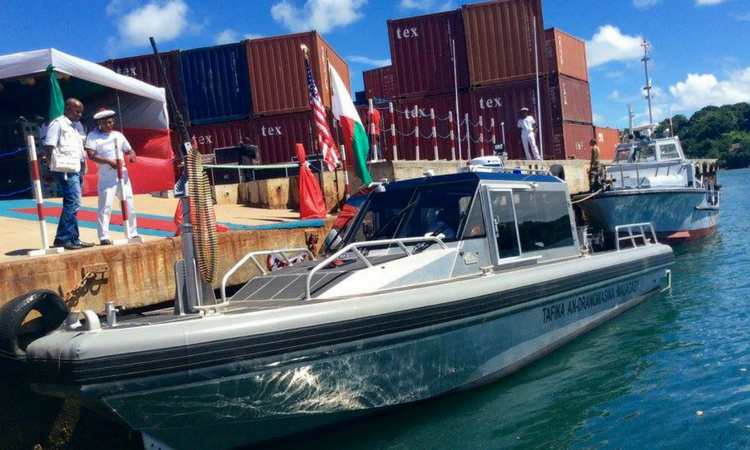 NOSY BE – Ambassador Robert Yamate and President Rajaonarimampianina attended today in Nosy Be the commissioning of the Metal Shark Defiant Response Boat.  The donation of this new vessel is a response to a request submitted by the Malagasy government in 2014.  Minister of Defense Béni-Xavier Rasolofonirina, General Lantoarinjaka Razafindrakoto – the Malagasy Army Chief of Staff, and Admiral Louis Antoine de Padoue Ranaivoseheno – the Commander of Malagasy Navy, were present during the ceremony.

Ambassador Yamate said today in his speech: “As Madagascar looks past her shores to protect her waters, vessels like this will aid in making these surrounding seas more safe and secure.”  The Ambassador added that this vessel will give the Malagasy government and Military “a versatile tool to counter illegal fishing, to stop trafficking of rosewood and other valuable resources, and to provide a robust search and rescue capability.”

This Metal Shark Boat measures 38 feet long and 11.5 feet wide. Powered by two diesel engines, the vessel’s average speed is 40 mph and its cruising range is 300 nautical miles.  Furthermore, the vessel has a modern communication system.

The donation, worth $823,000, includes supplies to maintain or repair the vessel for one year and training for the crew.

The Ambassador said that “Maritime security is an area in which Malagasy and United States cooperation is very strong,” noting that the addition of the Metal Shark Boat to the Malagasy Navy, as well as United States – Malagasy efforts to upgrade the Maritime Operation Center in Antsiranana along with the Indian Ocean Regional Information Fusion Center hosted in the country, will improve regional maritime security.  Moreover, he stated that “the vessel will expand the capacity of the Malagasy Navy to participate in exercises and other events to deepen the ties between Madagascar, its regional allies, and the United States.”

Ambassador Yamate seized the opportunity of today’s ceremony to congratulate the Malagasy Navy on the completion of the second annual deployment of the Malagasy vessel Trozona to the Cutlass Express maritime exercise earlier this month.