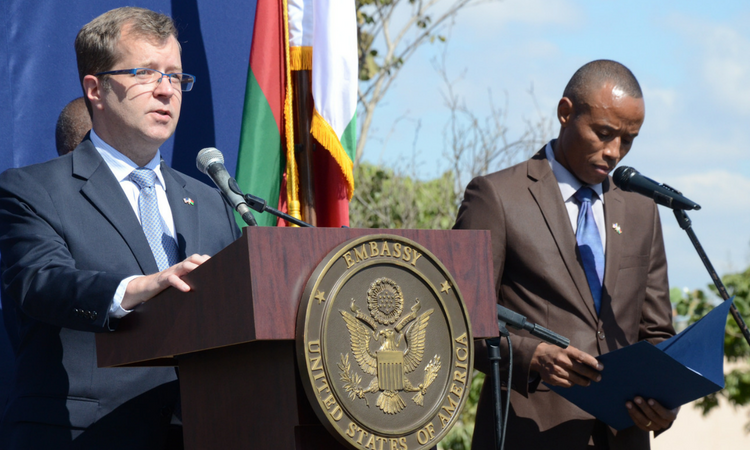 Thank you so much to all our honored guests for joining us here.  Before I begin my speech, I also want to give a special thank you to all the Embassy staff who have worked so hard over the last few months to make this celebration possible, particularly to our GSO Amy Monsarrat who, will soon be leaving Madagascar for her new assignment.  Thank you all so much.

On (or near) the 4th of July Americans gather, wherever we are, to celebrate our independence and our birth as a nation.  At Embassies throughout the world, it is also a day to celebrate our interdependence with people who share the values enshrined in our Constitution and our Declaration of Independence, whose anniversary we are commemorating today.  Here in Antananarivo, this is a day to recall all the steps forward we have taken together  with our Malagasy partners, that reflect our shared beliefs:  That all people are endowed with “unalienable Rights, that among these are Life, Liberty and the pursuit of Happiness;”  that legitimate governments “derive their just powers from the consent of the governed,” and that the purpose of a strong and healthy democracy is “to establish Justice, insure domestic Tranquility, provide for the common defence, promote the general Welfare, and secure the Blessings of Liberty to ourselves and our Posterity.”

So today, we celebrate all we have accomplished over our partnership that was begun 151 years ago with the arrival of our first consular official in Madagascar, John P. Finkelmeier.

Today we celebrate the work of USAID with its Malagasy and international implementing partners.  USAID has worked in close cooperation with the Government of Madagascar since 1984, investing over 1.5 billion dollars in health, food security, environment, disaster assistance, education, and programs to strengthen and build on our shared democratic values. The United States is one of the largest bilateral donors to Madagascar, providing approximately $100 million in 2017 directly, and contributing millions more to international organizations working in country.  And our commitment to the current Government of Madagascar continues to grow.   This year, USAID has seven new projects worth over $200 million during the life of these programs.

In the last year, we have worked with representatives from Government of Madagascar at all levels, with men and women from all parties, with people from the ruling party and the opposition, from civil society and the non-profit, from the business community, from media houses and universities, from the capital and the coasts.  With all of you, we have looked for new   and sustainable ways to build upon the growth Madagascar has achieved since holding successful election in 2014, and how to solidify those economic and democratic benefits moving forward.

We stood with the people of Madagascar as they collectively demanded the rights of peaceful assembly, freedom of speech and of the press, and the right to protest government actions and policies.

And we have stood by the government, the armed forces, and the police as they have sought to strengthen rule of law, assure public safety, and prevent loss of life and property.  As a sign of that strong relationship between our two militaries now and in the future, we have recently sent three more Malagasy men and women to study at American military service academies, including the first female “Elève-Officier” at the United States Air Force Academy in Colorado.

Over that last year, I am proud of everything that we have achieved working closely together.  We have done all this despite numerous challenges, including an unusually difficult plague outbreak, destructive storms, and shifting political landscapes.  Madagascar and the Malagasy people have taken some major steps forward, but there is still much progress to be made.

A few moments ago, I quoted some passages from the Declaration of Independence, signed on July 4th 1776 by members of the first continental congress, at Independence Hall in Philadelphia.  Two of the most important figures in the room when that happened were John Adams, the leading voice calling for independence, and Thomas Jefferson, the drafter of the declaration that all were about to sign.  Jefferson and Adams were this point allies in the fight for independence, and later served together at diplomatic missions for the newborn country in Paris and London.  But they had very different temperaments, differing versions of what direction the country ought to be led, and each had his own particular human flaws and weaknesses.  As a result, despite their great love of country and their shared experience of risking their lives for it, they grew into bitter rivals for decades.

After each had served as President of the new republic, they began to reconcile through the intercession of their mutual friends and colleagues.  In a series of letters, they laid out their version of the past for each other and their vision for the future for posterity.  As they grew older, their appreciation for the wisdom of the other deepened, and they apologized for the ways they had vilified each other in the press during their time as a candidates and Presidents.  Many in our country find profound symbolism in the fact that, although they were hundreds of miles apart, they died on the same day, just a few hours apart – on July 4, 1826, the fiftieth anniversary of the of their greatest achievement.

As we continue our celebration of that anniversary today, I hope we can do so in the spirit of mutual respect and admiration that Adams and Jefferson had, despite their differences and their difficulties.  Good friends will never agree on everything, but they will always find a way to overcome their differences for the common good.  As I look back on all that we have shared and all that we have achieved together so far, I am confident that the partnership between the United States and the Republic of Madagascar will continue to be strong and to be a cause  for celebration for many years to come.