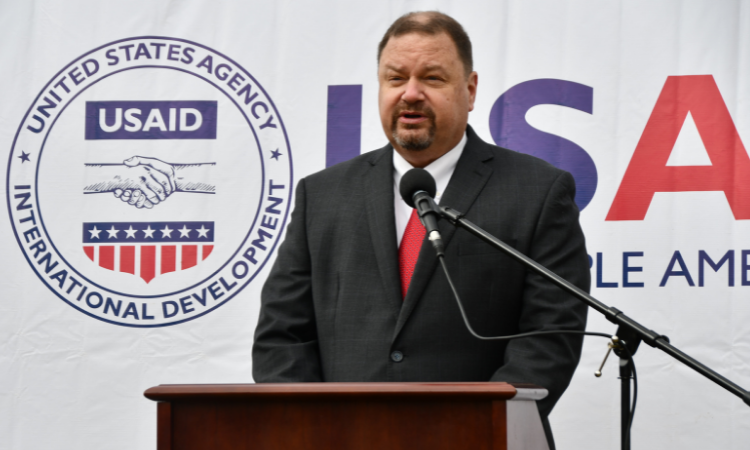 The U.S. government funding is feeding 683,000 people in the south and southeast

For the past eight years, a series of droughts have devastated southern Madagascar, and this year the situation is especially severe.  Many people are struggling day-to-day to find enough food to eat.  Farmers are experiencing sandstorms instead of rainstorms and the outlook for the current harvest is not optimistic.

That is why, barely a month after announcing a commitment of $40 million in emergency aid for the south and seven months after launching three new emergency and development programs worth a combined $100 million in the region, the U.S. government is announcing more desperately needed food, health, and agricultural assistance for southern Madagascar.

“Today, we’re announcing another $7.5 million that will go towards feeding people, treating children and pregnant women with malnutrition, and trying to get farmers back on their feet,” John Dunlop, Mission Director for the United States Agency for International Development (USAID), said.

“Our projects will deliver food, drinking water, and health care to 46,000 people.  We will provide treatment for 13,000 children with malnutrition.  And 41,000 farmers will get seeds and other support, along with the hope that the next harvest season will be better,” USAID Mission Director Dunlop added.

The money announced today will fund activities by the Adventist Development and Relief Agency (ADRA) in the hard-hit Ampanihy region and Action Contre la Faim (ACF) in Atsimo Andrefana, Androy, and Anosy regions.

“The sad reality of the situation is that the crisis is deepening and continuing to pull in more and more families,” said the U.S. Chargé d’Affaires a.i. Amy J. Hyatt.  “That’s why we are acting again to bring more assistance.  The United States will continue to stand by the Government and people of Madagascar to respond to this crisis, to try and prevent starvation and famine, to help those who desperately need it.”

Projects funded by the U.S. government are feeding 683,000 people, improving water access for 50,000 people, and preventing and treating malnutrition in 159,000 children and pregnant women.  This assistance will continue until the end of September.

From October 2021 to March 2020, USAID food assistance, funded by June’s $40 million announcement and today’s $7.5 million announcement, will be delivered to 489,000 people, and activities to prevent and treat malnutrition will help 357,600 children, pregnant women, and new mothers.

The two new five-year development projects announced in December, designed to introduce long-term solutions that prevent and reduce acute food insecurity among some of the most vulnerable people, have begun operations in the regions of Atsimo Andrefana, Androy, Vatovavy-Fitovinany, and Atsimo Atsinanana.

“Unfortunately, all the money we’ve dedicated to this emergency isn’t enough to feed and care for everyone who needs it.  That is why we continue to see reports of people eating leaves or locusts,” USAID Mission Director Dunlop said.  “More needs to be done.  Some donors have recently announced contributions. This is very welcomed, but even more help is necessary to meet the tremendous need that exists.”

More than 1.1 million people are currently facing high levels of food insecurity and that number is expected to rise.  At least 14,000 people are already at the point of famine, the upcoming harvests are projected to be very poor, and access to food will likely worsen heading into 2022.

The U.S. government continues to stand by the Government and people of Madagascar like “mpirahalahy mianala” to respond to this crisis, to try and prevent starvation and famine, and to help those who desperately need it.

Last year, USAID assistance to Madagascar totaled $133.5 million. That amount included $74.5 million in activities for the health sector, where the United States is the largest single-country donor, and $48.5 million for food security.  Since 2015, the U.S. government through USAID has been the leading provider of assistance to the south, committing more than $236 million to respond to the urgent needs of families in hunger and provide long-term solutions to food insecurity.